Tenants Together Condemns Voter Intimidation to Undermine Proposition 10
Post date: October, 09 2018
Tenants Together has issued an open letter calling on the California Apartment Association and other groups representing California landlords to publicly condemn a rash of unethical and retaliatory rent hikes, evictions, and voter intimidation tactics to undermine support for Proposition 10,... continue reading
Statement in Response to Terner Center Proposal
Post date: June, 01 2018
Movements for renter power are gaining strength. Even just a few years ago discussion of any type of rent regulation was a non-starter. Now, new rent control laws are passing and a measure is headed to the ballot to repeal Costa Hawkins, the industry created state law that severely limits local... continue reading
California Initiative Could Pave the Way for Rent Control
Post date: March, 25 2018
A ballot initiative could relieve Californians squeezed by rising rent prices. The initiative, led by the Alliance of Californians for Community Empowerment, is pushing to repeal the state's 1995 Costa Hawkins Rental Housing Act, which prevents rent control from being applied to all housing built... continue reading
State Ballot Measure Would Lift Rent Control Limits
Post date: March, 25 2018
Even if cities pass rent control today, such measures won’t apply to apartments that are at least 23 years old or to houses or condos of any age. But if a group of activists gets their way, California voters will have the ability to eliminate those restrictions next November. A ballot-initiative... continue reading
Landlords, Tenants Rights Groups Flood Capitol Building
Post date: January, 17 2018
A bill to repeal statewide restrictions on rent control is dead in the water. The Costa-Hawkins Rental Housing Act was passed in 1995, prohibiting cities from establishing rent control for single family homes or any newly constructed buildings (anything built after 1995). After being stalled for... continue reading 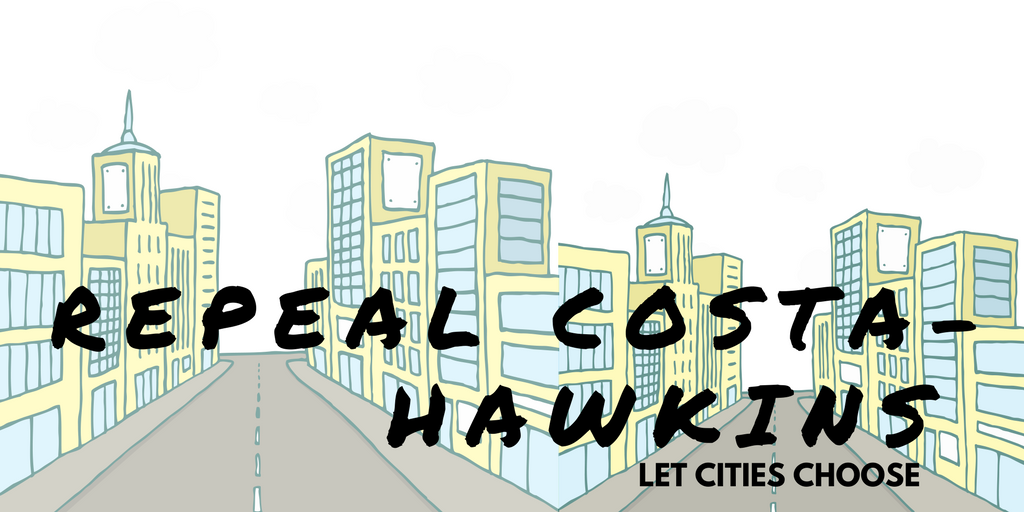 What is Costa-Hawkins?
For over twenty years, the Costa-Hawkins Rental Housing Act has been a disaster for California renters. A special-interest statewide law backed by the real estate industry that passed in 1995, Costa-Hawkins ties the hands of cities when it comes to protecting tenants from landlords who charge runaway rents:
Since the 2008 crisis, Wall Street has snapped up tens of thousands of single-family home rentals across the state and nationwide. Thanks to Costa-Hawkins, Wall Street landlords can hike rents by thousands of dollars overnight.
Since Costa-Hawkins passed in 1995, tenants have paid ever increasing rents and been forced from their communities or into homelessness due to high housing costs. Our communities are suffering while real-estate profiteers squeeze tenants for higher and higher rents.
Repealing Costa-Hawkins is common sense: it lets cities decide what’s best for them. Every city can make their own choices whether they want rent control and what buildings should be covered. It's time for Sacramento and the real estate lobby to stop dictating which properties are exempt from rent control, allow cities to choose vacancy control, and allow existing rent ordinances to be updated.
With housing costs completely out of control in California, now is the time to repeal Costa-Hawkins.
Why is Sacramento protecting Costa-Hawkins?
Rent control is broadly popular with Californians, but real estate interests have the ears (and campaign dollars) of many legislators in Sacramento. In 2008, at the height of the biggest economic collapse since the Great Depression, Tenants Together formed around the fight against Proposition 98, where the landlord lobby tried (and failed) to abolish all rent control in California. Despite Costa-Hawkins being on the books for over a decade at that point, the real estate lobby wasn’t satisfied.
In 2017, Assemblymember Richard Bloom (D-Santa Monica) introduced Assembly Bill 1506 to repeal Costa-Hawkins. The landlord lobby, major donors in California politics, worked furiously to stop the bill from moving to the floor by pressuring elected officials to vote AB 1506 down. As hundreds of tenants from all over California looked on from the Capitol halls, the repeal died by just one vote in the Assembly Housing Committee.
The same Wall Street landlords who snapped up foreclosed homes after 2008 spent heavily to prevent Costa-Hawkins repeal from succeeding at the November 2018 ballot.
Tenants are fighting to make their voices heard, but we will only succeed when we organize together.
FACT VS. FICTION
Repealing Costa-Hawkins will not stop new construction.
Rent control does not stop new construction. A recent Haas Institute Report found that “the six cities that had rent control in the Bay Area actually produced more housing units per capita than cities without rent control."
Landlords will do just fine if Costa-Hawkins is repealed.
Rent control laws are required by the courts to allow landlords a fair rate of return.
Rent control is a proven way to stop rent gouging and displacement.
Over a dozen cities in California have these protections.
Rent control works, and more cities are adopting it to address skyrocketing rents. In 2016 Mountain View, Richmond, and Santa Rosa passed new rent control measures.
What can I do to fight to repeal Costa-Hawkins?
Organize! Tenants Together supports the formation of independent tenant groups all over the state. The best way to combat the power of the landlord lobby is to build our own power. Click here to learn more about forming a tenants union.